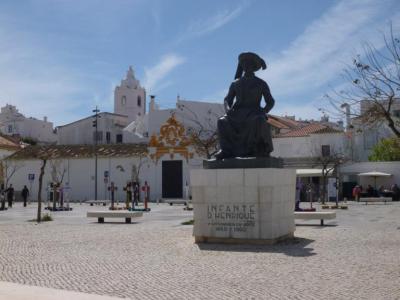 Starting with the nickname "The Navigator", much of the story of Infante Dom Henrique was myth and legend. Henry did have a strong interest on cosmography and he supported and launched maritime explorations of Africa but he stayed in Portugal.

Henrique is still in Portugal. He is celebrated with statues in several places in Portugal and in other countries. In Lagos, he sits in the main square of the town. He shares the square with the Old Slave Market (there is no new one) and with the Church of Santa Maria. The pedestal is inscribed "Infante D. Enrique", not "Navigator."

The statue was made by Leopoldo de Alemeida, a famous national artist, in 1960. Henrique is sitting. He stares rather vacantly into space. Perhaps, like Antonio in "The Merchant of Venice", he is worried about his rich argosies, dodging pirates on the high seas and crashing on a lee shore. Or perhaps he's planning his next venture abroad.
Image by Brigitte on Wikimedia under Creative Commons License.