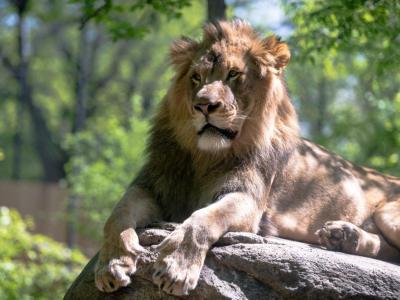 Henry Vilas Zoo is a 28-acre (11 ha) public zoo in Madison, Wisconsin, United States that is accredited by the Association of Zoos and Aquariums (AZA). Owned by the city of Madison, the zoo charges no admission or parking fees. It receives over 500,000 visitors annually.

In 1904 the city received 50 acres of land from William and Anna Vilas under the conditions that it be used "for the uses and purposes of a public park and pleasure ground". The park was named in honor of the Vilas's son, Henry, who died at a young age from complications related to diabetes. The family stipulated that the park always be admission free. By 1911, 28 acres of the park were partitioned into an animal exhibit, marking the creation of the zoo. The Madison Zoological and Aquarium Society was founded in 1914, and in 1926 became the Henry Vilas Park Zoological Society, which continues today. In 1964, the society was incorporated as a non-profit corporation. For the hundredth anniversary of the zoo, the Society operated a "Zoo Century" campaign to support a $27 million redevelopment of the zoo over the next 10 years. Plans call for a new Arctic Passage exhibit and a redesigned Children’s Zoo.

The zoo hosts an annual Zoo Run Run with a 5K-10K run/walk. The race starts and finishes in the zoo, and uses portions of the adjacent University of Wisconsin–Madison Arboretum.
Image by Dori on Wikimedia under Creative Commons License.
Sight description based on wikipedia