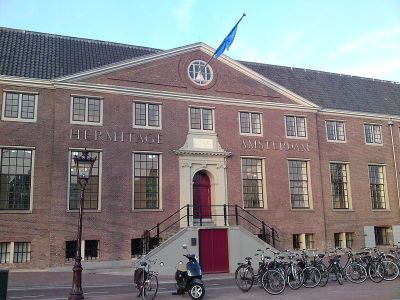 Relations between the cities Amsterdam and Saint Petersburg in Russia date back to the late 1600s when Tsar Peter the Great sought Dutch help in building his new city at the gate to the Baltic Sea (and to Europe). A more recent example is the founding of the satellite Hermitage Museum on the banks of the Amstel River in Amsterdam; a little slice of Russia, for those who can't travel to it.

Inaugurated in 2009 by Queen Beatrix of Netherlands and Dmitry Medvedev, the President of Russia, this museum has a large exhibition area of over 20,000 sq. ft. Considering the collection of over three million objects available with the parent museum, Hermitage Amsterdam has plenty to choose from when it comes to its rotary exhibits. On your visit, you could be lucky to see a Rembrandt or da Vinci’s work.

The "Treasures" exhibition includes audio (Dutch/English only) and takes around 60mins to view, with Hermitage masterpieces curated in a chronological manner. Other exhibitions on show include the Portrait Gallery of the Dutch Golden Age, featuring over 30 large-scale portrait works. Further, there is presently an Outsider Art exhibition including sculptures placed in the courtyard of the building.

Tip:
As with other museums, you can visit the gift shop for some souvenirs and the quiet café, too.