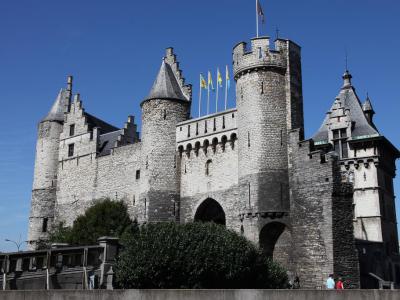 Antwerp is definitely the historians’ paradise, with each building and monument having its own tale and its slice of history to share with one and all, the Het Steen is one of them.

Antwerp is Europe’s second largest seaports and through the years this has played a very critical role in the history of the city. Where at one hand Antwerp enjoyed the benefits of the sea with trade and commerce, the open blue water and its vulnerable position also attracted Vikings and other plunderers along the years.

One of the oldest structures in Antwerp is the Het Steen, a castle which was once a part of a long wall of fortification around the city of Antwerp.

The Het Steen is speculated to have been around since 650 AD, when the structure was only made up of clay and mud. It was however not until the 9th century that the city got its first fortified walls built of tough stone and mud protecting the interiors from the Viking plunderers. And hence crediting Otto 1, during whose reign the walls were fortified, for establishing the city of Antwerp.

From serving as a military protection to a prison and finally a museum, the Het Steen has changed its role in time.
Image by Piotr Kuczyński on Wikimedia under Creative Commons License.
Sight description based on wikipedia

This sight is featured in a self-guided walking tour of Antwerp, Belgium within the mobile app "GPSmyCity: Walks in 1K+ Cities" which can be downloaded from iTunes App Store or Google Play. Please download the app to your mobile phone or tablet for travel directions for visiting this sight. The app turns your mobile device to a personal tour guide and it works offline, so no data plan is needed when traveling abroad.