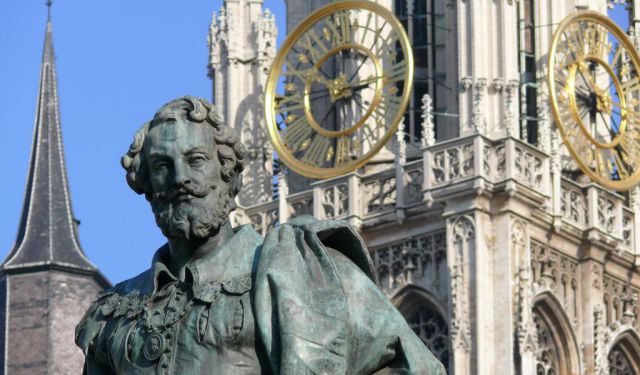 Image by Ad Meskens on Wikimedia under Creative Commons License.

Admire the unforgettable works of Peter Paul Rubens, Otto van Veen, Jacob de Backer and Marten de Vos at the Cathedral of Our Lady. Feel the spirit of antiquity at Beguinage of Antwerp. Listen to the music of the 18th century organ at St. James' Church and see the 18th century Baroque altar and the pulpit of Jan-Baptist Van Hool and Jan-Frans Van Geel at St. Andrew’s Church.
How it works: Download the app "GPSmyCity: Walks in 1K+ Cities" from iTunes App Store or Google Play to your mobile phone or tablet. The app turns your mobile device into a personal tour guide and its built-in GPS navigation functions guide you from one tour stop to next. The app works offline, so no data plan is needed when traveling abroad.

Sint-Joriskerk Antwerpen (St. George Church of Antwerp) is a Roman Catholic church dating back to 1201. Since that time, the church has received much damage, the most significant during the French Revolution. It was rebuilt in 1853 in a Neo-Gothic style.
Image by Torsade de Pointes on Wikimedia under Creative Commons License.
2

Founded in the 16th century, Sint-Andrieskerk (St. Andrew's Church) was the birthplace of writer Hendrik Conscience. Since November 2007 the church has served as a museum. Its Baroque altar made in 1729 by William Ignatius Kerricx and the pulpit of Jan-Baptist Van Hool and Jan-Frans Van Geel in 1821 are beautiful examples of Belgium’s art heritage.
Image by Wouter Hagens on Wikimedia under Creative Commons License.
3

3) Cathedral of Our Lady (must see)

Overlooking the city of Antwerp since the 14th century is the beautiful Cathedral of Our Lady, which till date dominates the city’s skyline. Built by architects Jan and Pieter Appelmans, the Cathedral boasts a magnificent Gothic structure with hints of Baroque style complementing the interiors of the building.

Whether you are a history buff or an admirer of buildings and structures, the Cathedral of Our Lady is one structure that has something to offer its every visitor. The structure stands as the epitome of the perfect combination of artistic architecture, breathtaking interiors and a dramatic past making it a tantalizing site to visit.

Although the construction of the structure began in 1352, it took more than a century to complete the entire construction. The Cathedral that stands today rests on the same site where once stood a small chapel dedicated to Our Lady, dating back to the early 10th century which was subsequently followed by the construction of a Romanesque Church. The Gothic Cathedral that took its place was considered one of the most magnificent structures of its time and one of the largest cathedrals in the whole of Benelux. However despite all its glories, the Cathedral of Our Lady has faced a very turbulent past. From natural fires to raids, plunders and assault by iconoclasts, the structure has born tremendous damage over the years. It has stood the test of time and stands proudly in the city of Antwerp.

Image by Piotr Kuczyński on Wikimedia under Creative Commons License.
4

The Saint Paul's Church of Antwerp has it's own interesting history – after surviving a couple of revolutions, fires and lootings it still managed to save a very rich collection of 17th century paintings of Flemish masters such as Rubens, Van Dyck and Jordaens but is best known for the hundreds of sculptures it houses. Build by the Dominican order in 1571 Saint Paul's Church didn't manage to "preserve" it's main tower which was rebuild in 1679 in Baroque style.
Image by bert76 on Wikimedia under Creative Commons License.
5

5) Church of Carolus Borromeus (must see)

The Spanish invasion of 1584 brought in a wave of forced Catholicism to Antwerp. Protestants either left the city or were converted to Catholicism. The Jesuits decided to counter this reformation and François d'Aguilon, a Jesuit mathematician began work on a Baroque styled church. Similar to the Chiesa del Gesù in Rome, this new church in Antwerp was completed in 1621 and was called the Ignatius Church. Much of the interiors including many ceiling paintings were completed by the local artist, P.P.Rubens. A unique feature of the Church is the mechanism to change the painting at the altar.

The Fire of 1718 destroyed most of Rubens’ work but the mechanism to change paintings survives to this day. The structure became a Parish Church in 1803 when it was given its current name. Today, it stands neatly tucked away behind some modern buildings at the Hendrik Conscience Square. Several protests during the 1960s and 70s have made this area a pedestrian zone which gives the area its instantly appreciated serenity. During your walk to the Church you might come across the soothing notes of violin being played to make your visit very special. We request you to please check the open hours of the Church before visiting. The Artist’s mass on Sundays and other holidays should not be missed.

Image by Ad Meskens on Wikimedia under Creative Commons License.
6

Known for its lush and ornate architecture, spectacular interiors, its ambitious rivalry and not to forget the final resting place of much loved Flemish painter P.P.Rubens, the St. James’ Church is a must see in Antwerp.

Probably one of the most visited churches in city, the Saint James’ Church or the St. Jacobskerk attracts tourists from all over the world. The site where the Church now stands was first home to a humble chapel that was en route the burial place of Apostle Jacob also known as James. A larger more prominent structure was later designed to take over the modest chapel. Built over a century, the construction on the structure commenced in the year of 1491 but was not completed until 1656. Financed by high class merchants and noble men, a tower measuring a height of 150m was designed for the Church. This was to compete with the already existent 123m tower that donned on the Cathedral of Our Lady. However, due to the fall in financial conditions, the ambitious tower could never be completed.

Fortunately, the interiors of the Church still stand as proof to the lavish expenses made for the structure. Sumptuously filled with ornate Baroque decorations and design, the interiors of St. James are spell binding.
Image by Sergio Calleja on Wikimedia under Creative Commons License.
7

Antwerp is filled with historical and architectural delights, some quite prominent while others that go unnoticed by many and the Beguinage is one such historical site.

Secluded from the relatively urban area, the Beguinage is a welcoming sight for those who admire vintage architecture and love history. Enclosed within tall, bricked, windowless walls, the clustered housing complex of the 16th century transports its visitor to the medieval era. Today these isolated structures, reminisce the tale of the land and keep alive the memory of the much forgotten Beguines.

The Beguines were a group of religious women who followed the disciplined lives of the nuns without taking a formal oath or vow. However, unlike nuns, a Beguine had the freedom to leave the institution whenever she liked. This was a very popular cult during the 12th century especially amongst the Low Countries, which includes modern day countries of Belgium, Netherlands, parts of Germany and France.

The Beguinage in Antwerp was founded around 1240 and was situated outside the walls of the city. Due to constant attacks by plunderers, the Beguinage was shifted within the city limits of Antwerp. Today, all the Beguinages around the world are preserved as ‘Heritage Site’s by the UNESCO.
Image by frank wouters on Wikimedia under Creative Commons License.