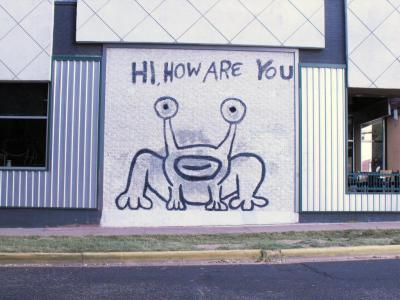 Ask anyone to name a mural associated with Austin, and chances are they will say, “Hi, How Are You?” This simple talking frog painted on the side of the former music store, now Thai restaurant, near the University of Texas campus, is one of the most beloved murals in Austin. The iconic piece was created by Daniel Johnston, who is also a musician, in 1993. Named “Jeremiah the Innocent,” it was originally created at the request of the record store Sound Exchange. People erroneously believed the frog was named after the bullfrog in the Three Dog Night song “Joy to the World”, until in a 2016 interview Johnston revealed that it was the press that came up with that name. As for the mural itself, it is a variation of the frog image that the artist drew as a cover for his 1983 eponymous “Hi, How Are You?” album.

The artwork gained worldwide acclaim when Kurt Cobain put on a T-shirt emblazoned with the image during his 1991 promotional tour. The Frog eventually appeared in Rolling Stone magazine and has been a fixture on the Drag ever since, surviving building remodels and the occasional prankster vandalism. The friendly-looking amphibian has spawned an entire industry around it and in 2014 was declared a cultural landmark. The mural is now lovingly preserved by the current “Thai, How Are You?” restaurant owner.
Image by Tim Patterson on Flickr under Creative Commons License.