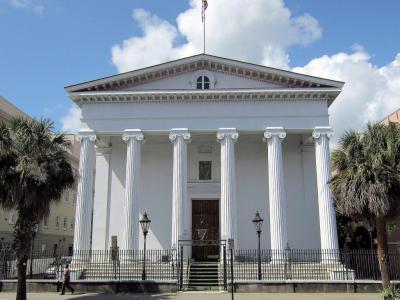 Despite the ravages of the Civil War, the periodic destruction caused by city-wide fires, and the disastrous earthquake of 1886, a surprisingly large number of Charleston's public buildings survived, including the Hibernian Hall, a Greek Revival structure designed for the Irish Hibernian Society, which held the first St. Patrick's Day parades in the U.S.

Designated as a National Historic Landmark in 1973, the hall is nationally significant for its use during the 1860 Charleston Convention, in which the Democratic Party, divided by opinions on slavery, failed to select a presidential nominee, ensuring victory for the anti-slavery Republican Party and its candidate, Abraham Lincoln, in the 1860 presidential election.

The building is often used for wedding receptions today, its glorious three-story rotunda with dual staircases leading to the ballroom allowing for a grand entrance of the bridal party, especially when led by a bagpiper, a Hibernian tradition.
Image by Spencer Means on Flickr under Creative Commons License.