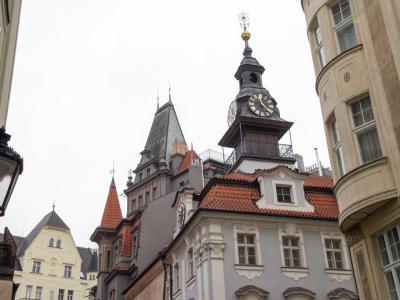 The High Synagogue in the Jewish Quarter was built in 1568 next to the Jewish Town Hall. It was financed by Mordechai Maisel, a philanthropist and one of the richest men in Prague.

Built next to the Jewish Town Hall, the synagogue was a place of preaching for the councillors of the Town Hall and also where the Rabbinic Court was held. The name came from the fact that the prayer hall is found on the 1st floor of the building.

In 1689 the synagogue was destroyed in the Great Fire, but was reconstructed and the original ribbed vault with its 8 pointed star was carefully restored. In 1883 the building was renovated and received the rather simplistic façade it has today.

During the Nazi and Communist occupations the synagogue was used by the Jewish Museum to display Torah textiles, silver ceremonial tools and ancient Hebrew books. After the fall of communism a bookshop opened and sold books about the Holocaust.

Since 1997 the synagogue is once again a place of worship for Prague citizens and foreigners and is no longer open to tourists.
Image by Chmee2 on Wikimedia under Creative Commons License.
Sight description based on wikipedia