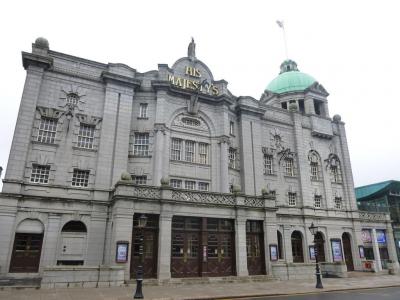 His Majesty's Theatre, Aberdeen (must see)

His Majesty's Theatre opened in 1906. The granite building was designed by Frank Matcham in the Free Renaissance architectural style. The four-story theatre has a copper domed tower and a Tragedy and Comedy statue.

His Majesty's Theatre underwent a significant refurbishment in 1999. Along with new seats and backstage facilities, it was granted a new box office, bars that are open for pre-show drinks, a cafe and a restaurant.

Though it originally held more than 2,300 seats, it remains the largest theatre in Aberdeen with a seating capacity of more than 1,400. It regularly hosts touring companies, international performing artists and local acts. Along with the Music Hall, His Majesty's Theatre hosts the annual Aberdeen International Youth Festival.

Tourists can visit His Majesty's Theatre in person during box office hours. The box office is open from 10 AM to 6 PM on Tuesday through Saturday. It is also open one hour before each show is scheduled to start.
Image by Ragazzi99 on Wikimedia under Creative Commons License.