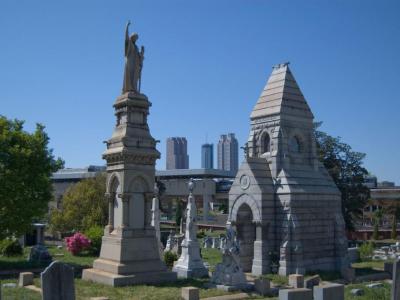 Oakland Cemetery is an excellent example of a Victorian-style cemetery and reflects the "garden cemetery" movement started and exemplified by Mount Auburn Cemetery in Massachusetts. The original 6 acres (24,000 m2) of Oakland remains one of the oldest historical plots of land in Atlanta, most of the rest of the city having been burned in 1864. Because of its age and location, the cemetery directly reflects the history and changing culture of the City of Atlanta and the significant events it has seen. Names of Atlanta streets, buildings, parks, subdivisions, and more can be found within the cemetery gates. An estimated 70,000 people are interred at Oakland, and while the last plots were sold in 1884, there are still regular burials today.

Among the many important personalities buried here are golfing legend Bobby Jones, Georgia governors and Margaret Mitchell Marsh, author of Gone with the Wind. In Margaret Mitchell's novel, Gone With The Wind, Oakland Cemetery is mentioned as the final resting place of Scarlett O'Hara's first husband, Charles Hamilton, and as the burial place of many Confederate soldiers who died during the Civil War.

The cemetery has an enchanting view of Downtown Atlanta and you can find a number of restaurants down the street.

Why You Should Visit:
One of the most interesting places to see in Atlanta, full of history and beauty and secrets and stories across its many sections.
Tours are inexpensive and led by intelligent guides who engage people in conversation, and give facts about the many people buried here.
The space itself is massive with many walking trails and lots of stately trees which cast a lot of shade throughout the property.

Tip:
Stop by the Visitor Center when you first arrive to get a few bottles of water and to find out about the guided and/or audio tour if you're so inclined.
The 'Capturing the Spirit of Oakland' Halloween tours occur over two weekends near the end of October and are sold out quickly each year.