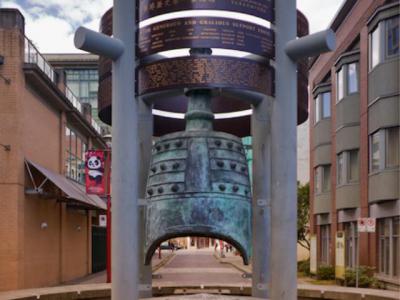 Shanghai Alley was the first part of Historic Alley to be constructed and inhabited. Later, in 1904, Canton Alley was added. Eventually, this was followed by a Chinese-style courtyard surrounded with residential and commercial buildings running in two parallel, southward rows. The heart of Historic Alley was the 500-seat theater, built in 1898, surrounded by restaurants and shops. This gave residents of Chinatown a way to enjoy Chinese-language entertainment, food, and company without having to leave their Vancouver home district, and ultimately resulted in a tightly woven Chinese-Canadian community, within the boundaries of which one could spend their entire life.

The end result of Historical Alley is a Chinatown that is the second largest in all of North America, and one of the most visited by ethnic Chinese from outside of Vancouver. People of all races and nationalities come to Historical Alley for food, shopping, entertainment, and cultural events, as well as to view the Millennium Gate which crowns the Chinatown entrance.

Another key sight to behold here, set in the centre of Shanghai Alley, is the Western Han Dynasty Bell. This bell is a replica of the one unearthed in 1983 during an excavation in Guangzhou, China, and was gifted to the people of Vancouver from the city of Guangzhou on the occasion of the 15th anniversary of the two cities twinning. While the original bell dates back over two millennia and symbolizes the age of settlement in the Pearl River delta in Guangzhou, its replica marks the spot of the first Chinese settlement in the lower mainland of British Columbia.
Image by Rikki / Julius Reque on Flickr under Creative Commons License.