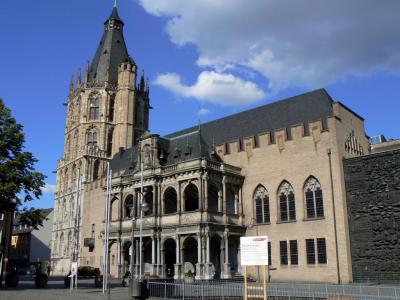 The town hall in Cologne was constructed by Wilhelm Vernukken between 1569 and 1573. He was a well-known master builder. This building is also referred to as loggia and is a standing example of a typical Renaissance era construction. Originally, the function of loggia was to act as a link between the citizens and the city council. Even today, in many aspects, it functions in the same manner. Previously, latest rulings used to be informed to the citizens during the morning address at the loggia. Now, it acts as an informal link between Cologne citizens and the council. It houses part of the city government, including the city council and offices of the Lord Mayor. It is Germany's oldest city hall with a documented history spanning some 900 years. The history of its council during the 11th century is a prominent example for self-gained municipal autonomy of Medieval cities. Today's building complex consists of several structures, added successively in varying architectural styles: they include the 14th-century historic town hall, the 15th-century Gothic style tower, the 16th-century Renaissance style loggia and cloister, and the 20th-century Modern Movement atrium. The so-called Spanischer Bau is an extension on Rathausplatz but not directly connected with the main building.

On the upper floor parapet, you can find an exquisite sculpture that depicts the struggle between a lion and mayor Gryn. This sculpture was created to symbolize the council’s power. The tower of the town hall was constructed by the Cologne Guilds between 1407 and 1414. The height of this tower is 61 meters and there are a total of five floors. Three lower floors are tetragonal shaped and the two upper floors are octagonal. At the upper floors, you can find a popular wooden sculpture with a grotesque face called "Platzjabbeck" and 130 impressive stone statues. When the tower clock strikes twelve, the grotesque faced statue sticks out its tongue. Other impressive features of the City Hall you must not miss include the Gothic shaped Hansasaal, which is the meeting room and the heart of town hall, the eight figures of prophets located at the north side, council chairs and the wood inlay doorways.

Why You Should Visit:
Oldest town hall in Germany; a complex of different architectural styles, pleasant to see. The stone-paved area is perfect for a walk.

Tip:
Nice views from the other side of the river, along with the bridge and the cathedral.
Image by Politikaner on Wikimedia under Creative Commons License.
Sight description based on wikipedia