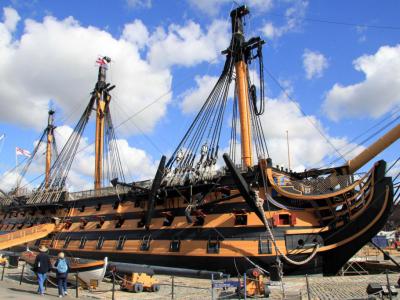 The sixth is Admiral Lord Nelson's HMS Victory, a first-rate 104-gun ship of the line. She was Nelson's flagship in the climactic Battle of Trafalgar in 1805. Nelson died on her quarterdeck while under fire from the French 74-gun Redoutable. Trafalgar was the last sea battle of Victory's career. She was relegated to 2nd rank in 1807.

HMS Victory saw service as a troopship until 1811. From 1813 to 1817, she was used as a prison. In the 19th century, Victory was periodically under threat of being broken up. By 1921 the vessel has collapsed. Shipping magnate Sir James Caird, a principal donor of the National Maritime Museum, underwrote the public Save the Victory campaign.

The Victory was moved to the No. 2 Dock at Portsmouth, the oldest dry dock still in use. No. 2 Dock became her permanent home. The restoration was interrupted by World War II. There was some damage from a 500-pound bomb during the Blitz, but the country and Victory carried on.

Preventive maintenance for the 18th-century Victory will always go on. It was decided to restore the ship to her Battle of Trafalgar condition in 1920, but this was not achieved until 2005, just in time for Trafalgar 200 celebrations.

HMS Victory is part of the National Historic Fleet and is also the flagship of the First Sea Lord since 2012. She is the oldest commissioned ship in the world. As a museum ship, she attracts more than 350,000 visitors annually.

Visitors can descend to the bottom of the dry dock. A view from the bottom of a 3,600-ton warship is a first. The Victory gallery is refitted. The film, interactive exhibits, and battle artifacts tell the ship's story. And there is the 200-year-old ten-foot-tall figurehead.
Image Courtesy of Flickr and Karen Roe.