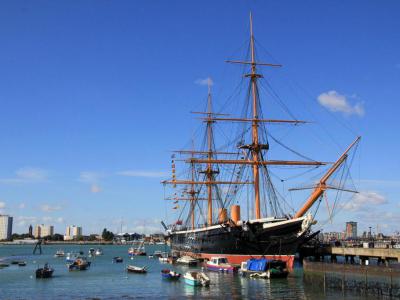 The HMS Warrior was the biggest, fastest, and most powerful warship of her kind when she was launched in 1860. She was years ahead of the American Merrimack and Monitor, way rapid and more seaworthy. The Warrior was Britain's first iron-hulled, armored warship, offering protection from explosive shells. She was a worldwide game-changer.

Intimidating as she was, she never fired an angry shot. Invincible she may have been, her active duty career was short. Soon she was absolete and quickly outclassed by newer ships, faster with thicker armor and heavier guns. In 1871, the Warrior was downgraded to reserve status. In 1924 she was up for sale as scrap.

The Warrior wasn't scrapped but converted into a floating oil tank at Pembroke Dock. The oil depot closed in 1978, and the ship underwent restoration by the Maritime Trust. In 1987 the Warrior returned to Portsmouth Harbour. Saved from the knackers, she is now a proud ship museum and a naval monument.

A complete conservation and restoration program, costing upward of 4.2 million pounds, was completed in 2019. The Warrior is now represented as she was in her Round-Britain Tour of 1863.
Image Courtesy of Flickr and Karen Roe.