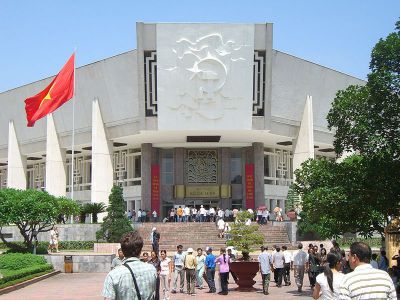 This museum is dedicated to the life and times of Vietnam’s founding father, Ho Chi Minh. The museum has five floors full of memorabilia belonging to or related to the great leader of North Vietnam. It was opened on the 2nd September 1990, a hundred years after the birth of Ho Chi Minh.

The building housing the Ho Chi Minh museum combines Vietnamese architectural elements with Russian architectural styles. The facade has a large relief of the hammer and the sickle. Exhibits in the museum include military orders, photographs, memorabilia of the October and August revolution, the struggle for independence and the many movements led by Ho Chi Minh. The top floor has a large metal sculpture of a lotus flower in gold and many objects relating to the revolutionary leader. A labyrinth of murals tells the story of Vietnam from past struggles to future hopes. National totems surround a bright red volcano that symbolizes the Vietnamese revolutionary movement. It has a library, a large hall, meeting rooms and research rooms.

The museum stays open from Tuesdays to Thursdays and on weekends. Bags and cameras are not allowed and visitors are required to follow a strict dignified dress code and maintain silence while viewing exhibits.
Image by Aaron on Wikimedia under Creative Commons License.