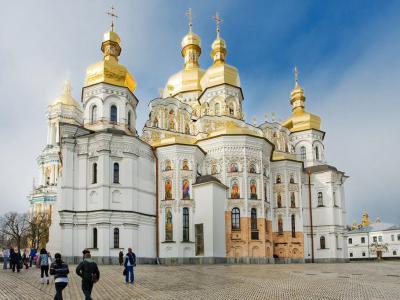 Considered the most important religious site in Kiev, the Holy Dormition Cathedral is a part of the Pechersk Lavra Historic-Cultural Preserve and was declared world heritage site by UNESCO in 1991.

The beginning of monkhood in Kiev is closely associated with this place. One of the caves at the Pechersk Lavra Monastery was once home of the Christian priest Illarionov who in 1051 became the Metropolitan of Kiev. After he vacated the cave, it was occupied by Venerable Anthony, an ascetic who sought isolation in order to serve God without any distraction. Despite his intention, the presence of Anthony soon became obvious and started to draw people like a magnet. Some of these people came for an advice, others sought to become monks themselves. Eventually, a community of people dedicated to God was established. At some point, Anthony left the caves for an isolated dwelling on the opposite hill (known today as the Near Caves), while other monks remained in the old settlement (the Far Caves) and gradually organized themselves into a community with strict regulations, residential quarters and places of worship. The Holy Dormition Cathedral was the first praying facility built by the monks, sometime between 1062 and 1074. The wooden structure was destroyed in the following century by foreign invaders. The church was rebuilt in 1470, by Prince Semen Olegovich, only to be destroyed again in 1482. Over the centuries, the monks, inhabiting the caves, have endured many hardships - devastating invasions, property expropriation and persecution. After the 1980s, little by little, life at the monastery got back to norm with the help of the government. In 2000, the Holy Dormition Cathedral was inaugurated and the monastic life was once again strengthened. Today, the monks are preoccupied with ensuring that the prayer here doesn't stop ever again.
Image Courtesy of Wikimedia and Деревягін Ігор.