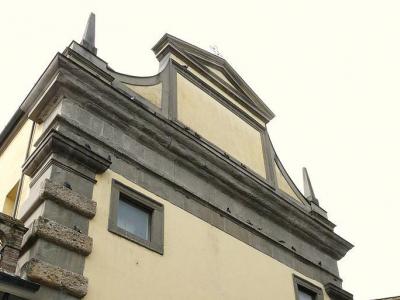 The Holy Trinity Church is situated on Via Elisa and was completed in 1595. It is characterized by a single room covered by a barrel vault and the presence of an altar. The original and complex decoration started in 1595 and was finished in 1721. The paintings on the altar describe the Trinity with Saints John the Baptist, Paul, Sebastian, Antonio and Caterina Pietro Paolini. On one side of the altar the Madonna del Latte made by Matteo Civitali can be seen. The decoration of the Holy Trinity was made by Pietro Sorri and was completed in 1721.
Image by sailko on Wikimedia under Creative Commons License.