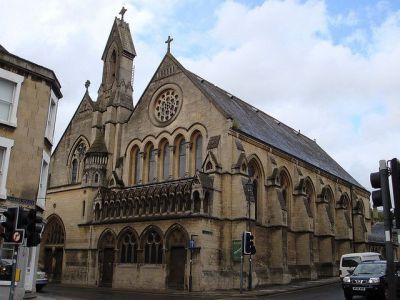 Holy Trinity Church is one of many examples of Bath’s strong ecclesiastical heritage. Centrally located on Chapel Row, just off Queen Square to the west of the city centre, the Holy Trinity Church can be viewed as part of a short walking tour of the city’s finest churches. Founded in 1822, the Holy Trinity Church has been a cornerstone of the local community for almost two centuries. Sadly, the church was forced to close its doors in March 2011 as it was unable to sustain the running costs of such a large building.

The building currently stands empty, but in a city with a proud tradition of restoring and revitalizing its finest buildings, there is hope that it can be put to use soon and not fall into disrepair. One of three Anglo-Catholic churches in a city where religion has often played a major role, the Holy Trinity’s closure has caused much local consternation. For now, the congregation has moved to St. Michael’s, a fellow Anglo-Catholic church on Broad Street. As the building is currently closed, tours and viewings are not possible, but the striking architecture of the exterior can still be appreciated as you walk to and from Queen Square.
Image by Budby on Flickr under Creative Commons License.