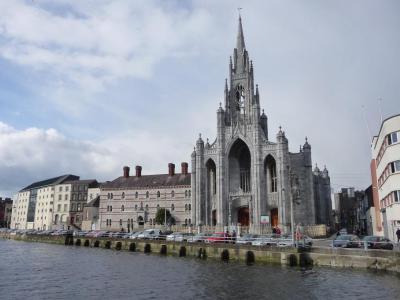 Holy Trinity is a Regency Gothic-style church, built in 1832. In 1889 it had an addition of Gothic-Revival portico, followed by a memorial chapel in 1906. Topping the building is a slate hinged roof, with copper roof vent to ridge and stone spire. The limestone exterior shows buttresses, carved pinnacles, and Gothic arched windows with curvilinear cusped tracery and hood mouldings, plus a four-centred arched doorway. Hood moulding are also found on corbels with carved masks. Twinned doors with overpanels have quatrefoil glazed panels and three stained glass panels in east wall, created by Harry Clarke studios. Glazing on other windows is plain and coloured with undulating lead rods, and appeared around 1960. Surrounding the church is low limestone wall with iron railings and gates. At the back is a car park. With its prominent quay-side location, the church dominates the neighbourhood and adds elegance to the city centre.
Image by Eamonn on Flickr under Creative Commons License.