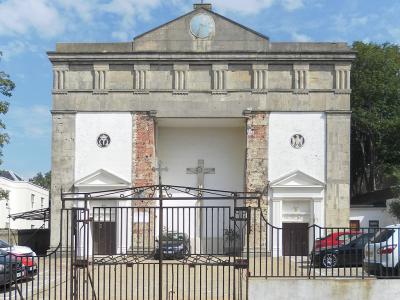 The Church of the Holy Trinity is a Greek Orthodox church in Brighton, part of the English city of Brighton and Hove. Built in 1838 in one of Brighton's most notorious slum districts, Carlton Hill, it was an Anglican church for most of its life: dedicated to St John the Evangelist, it was used by the Anglican community until it was declared redundant in 1980. After some uncertainty about its future, it was sold to Brighton's Greek Orthodox community in 1985 and has been used as their permanent place of worship since then. Reflecting its architectural and historical importance, it has been listed at Grade II since 1971.

Built in brick (in a Flemish bond pattern) with some stone dressings, the church has a stuccoed southern frontage, facing Carlton Hill; none of the other elevations are easily visible. A deep central recess is flanked by two prominent wings with entrance doors and large stone pilasters, above which is a pediment with an embedded clock. The large crucifix above the entrance is a recent addition. The Georgian-style front elevation, which was improved in 1957 by L.A. Mackintosh has been described as "strangely bleak".
Image by Hassocks5489 on Wikimedia under Creative Commons License.
Sight description based on wikipedia