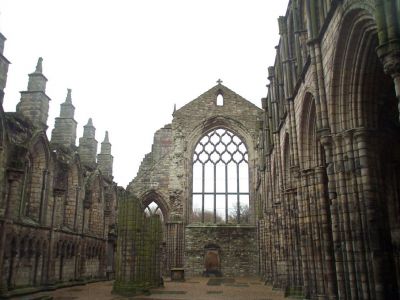 Holyrood Abbey is a ruin of the Canons Regular abbey which was founded in 1128 by King David I. Rood is an old Scots word for the cross on which Jesus Christ was crucified; hence the name Holyrood means "Holy Cross".

Legend relates that in 1127 King David I, while hunting in the forests east of Edinburgh, was thrown from his horse startled by a hart. According to various accounts, the king was saved from the charging animal by the miraculous appearance of a holy cross descending from the skies, or by sunlight reflected from a crucifix which suddenly appeared between the hart's antlers while the king attempted to grasp them in self-defence. In gratitude for his escape, David I established Holyrood Abbey on the site.

The abbey was extensively remodelled in 1633 for the coronation of Charles I. In 1688, following the Glorious Revolution, the Edinburgh mob broke into the abbey, entered the Chapel Royal and desecrated the royal tombs.

The association with these events and the absence of a royal court left the building out of public interest. The ageing timber roof trusses replaced by stone vaults and outer stone slabs proved to be disastrous. The excessive weight of the stone could not be supported by the walls and eventually caused severe deformation. On 2 December 1768 the roof collapsed in two stages, leaving the abbey as it currently stands, a roofless ruin.

Several proposals to restore it, made since the 18th century, have been rejected. The remaining walls of the structure lie adjacent to the Palace of Holyroodhouse, at the eastern end of Edinburgh's Royal Mile. Surrounded by Edinburgh's largest park, Holyrood Park, the site of the abbey, protected as a scheduled monument, sits atop the 250 meter-high Arthur's Seat offering a great view of the city. The area is ideal for biking, hiking or a picnic, with many rocky crags, loch and meadows guaranteeing visitors an unforgettable time in Edinburgh.
Image Courtesy of Wikimedia and Kaihsu.
Sight description based on Wikipedia.