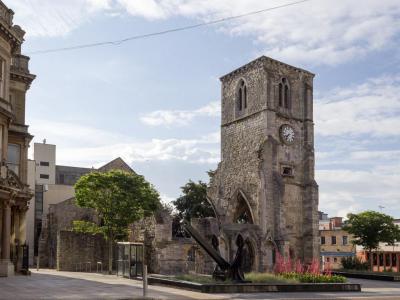 Holyrood Church (or Holy Rood Church) was one of the original five churches serving the old walled town of Southampton. Built in 1320, the church was destroyed by Nazi bombing during the blitz in November 1940. In 1957 the shell of the church was dedicated as a memorial to the sailors of the Merchant Navy.

The first documentary evidence of the existence of Holyrood was in 1160 when Henry II granted the Chapels of St. Michael, Holyrood, St. Lawrence and All Saints' to the monks of St. Denys. The name of the church, "Holy Rood", indicates its Saxon origins.

Following the destruction of the church during WWII, the only parts of the church still standing are the tower at the south-western corner and the chancel at the eastern end, together with large parts of the north walls. The wooden spire was lost as was the great west window, whilst the central area of the church was completely destroyed. On the west face of the tower there is a memorial plaque to Charles Dibdin (1745–1814) described as a "native of Southampton, poet, dramatist and composer, author of Tom Bowling, Poor Jack and other sea songs". Above the plaque are the clock and church bells, which feature pre-1760 Quarter jacks, small figures that strike the quarters of each hour.

Inside the church, under the tower is a memorial fountain, erected in 1912–13 for those who lost their lives in the sinking of the RMS Titanic. The fountain is supported on four stone columns, with a curved pediment on each side with carvings depicting the "Titanic", surmounted by a four-columned cupola.
Image Courtesy of Wikimedia and Richard Nevell.
Sight description based on Wikipedia.