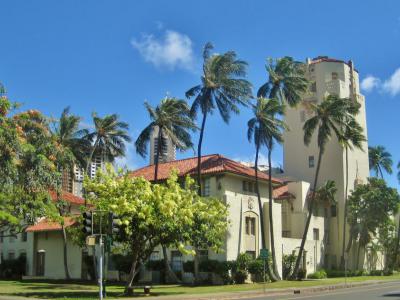 Honolulu Hale is the official seat of government of the city and county, site of the chambers of the Mayor of Honolulu and the Honolulu City Council. In the Hawaiian language, "hale" (pronounced HAH-leh) means house or building.

Honolulu Hale was an idea started by Joseph J. Fern. Originally, Honolulu was overseen by a Board of Supervisors. During the existence of the County of Oʻahu, the Board met in city halls all around Honolulu. When the County of Oʻahu and the Board of Supervisors dissolved in 1907 and established the City & County of Honolulu, Fern became its first mayor and began making preliminary plans for the construction of a city hall. Unfortunately, Fern died in 1920 of diabetes before he could persuade residents of the need for a permanent city hall. Mayor John H. Wilson, who was also the Honolulu Chapter President of the American Association of Engineers, carried on Fern's dream.

Honolulu Hale was built in an Italianate Spanish Colonial Revival style that was popular in the islands at the time. Its interior courtyard, staircase, and open ceiling were modeled after the Bargello in Florence. Einar Peterson was commissioned to paint frescoes in the interior while Mario Valdastri was commissioned to install intricate stonework. In 1951, two three-story wings were added to the original structure. A new, high-rise Honolulu Municipal Building was later added at 650 South King Street.

Tip:
A great time to visit the Hale is during the holiday season when they decorate it with a display of illumination nicknamed the Honolulu City Lights. Make sure you look up!