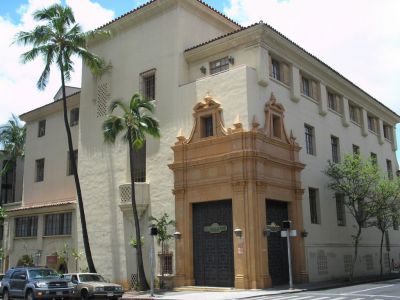 The Kingdom of Hawaii had one of the earliest police forces in the world, dating back to the reign of Kamehameha III. The Honolulu Police Station was built in 1931, and is located across from the former location of the Yokohama Specie Bank. It was designed by architect Louis Davis in a Spanish Mission Revival style, to match the new city hall, Honolulu Hale. The building has a stucco-covered concrete shell, and is adorned with Waianae sandstone, imported Roja Alicante marble from France, and Philippine mahogany doors.

In 1885, this site was the home of a courthouse. When a devastating fire took out much of Chinatown, police operations had to be moved to this area. In 1930, the Territorial Government demolished the old courthouse, and petitioned local architects to come up with designs that would give Hawaiian architecture a more distinctive and tropical feel. During World War II, the Yokohama Specie Bank was occupied by the U.S. Army and used as a base of military police operations, partly because of its location across the street from the Police Station. The Police Department remained in this historic building until 1967, while the district court remained until 1983. In 1986, the building was renovated by the City and County of Honolulu, and created a three-story addition. Since then, the Police Station has been occupied by the Real Property Assessment Division.
Image by Joel Bradshaw on Wikimedia under Creative Commons License.