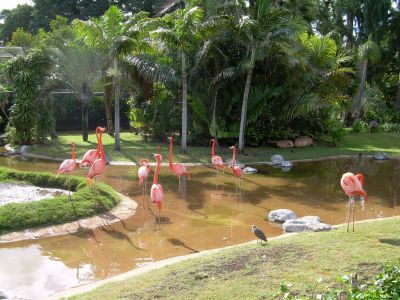 The Honolulu Zoo has the distinction of being the only zoo in the entire United States to be established with money from a sovereign monarch. It is located on three hundred acres of Kapiolani Park, named for Queen Kapiolani.

The Park was originally established by King David Kalakaua, the Queen's husband. The natural ponds and marshes in the swampy area were cleaned up and beautified, and the park was opened in 1877. In 1914, after the overthrow of the Hawaiian monarchy, the City & County of Honolulu named Ben Hollinger as its new Administrator of Parks and Recreation. Now in charge of Kapiolani Park, Hollinger began collecting animals to showcase, including a monkey, lion cubs, and a honey bear. When a steamship arrived in Honolulu Harbor with a live elephant on board, Hollinger begged the City & County of Honolulu to buy the animal for the park. Once the elephant, “Daisy,” was purchased, Honolulu finally had a zoo.

During the Depression, the Zoo began to fall into disrepair as few people were able to afford the luxury of visiting it. In the 1990s, the Honolulu Zoo experienced a resurgence of enthusiasm, when its exhibits were redesigned to more closely mimic their animals' natural habitats. Today, the Honolulu Zoo has over 1,230 animals and sees over 600,000 visitors every year.

Why You Should Visit:
Many cool birds of all different varieties, and the most playful, acrobatic gibbons you'll ever see!
The layout is linear enough that you don't need to constantly check the map, but twisty and windy enough that you feel like you're on an adventure.

Tip:
Best going early in the morning, when it's cooler in the afternoon, or in the cooler months, as the animals like to stay in the shade.
Alternately, if you have a chance, do a night trip when available – it's a very different experience with the nocturnal animals up and about.

Religion in Hawaii is a mix of Christianity, Buddhism and native religions. This is the reason why diverse religious structures, such as shrines or catholic churches can be seen everywhere in Honolulu. Since 1820, the Christian missionaries and Chinese began to popularize their religion and traditions. Nowadays, the ancient Hawaiian religions have almost disappeared. Take this self guided walking...  view more