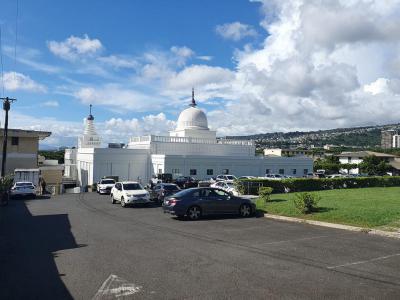 The Honpa Hongwanji Mission is a district of Jodo Shinshu Buddhism, which was established in Hawaii with the immigration of Japanese workers to Hawaii's sugarcane plantations. This is a school of Mahayana Pure Land Buddhism, which originated in India. Mahayana Buddhism is the larger of two major Buddhist traditions, though its origins are not well-documented or completely understood. The Jodo Shinshu school was created by Shinran Shonin, a Japanese Buddhist monk who lived from 1173 to 1263.

The first Hongwanji temple was dedicated as early as 1889. Eight years later, Japan began sending ministers to establish more temples for Japanese people living in Hawaii and the remainder of the United States. Honpa Hongwanji Betsuin is located in Honolulu, on Pali Highway. It features a large, gilded central altar with an image of Amida Buddha. Amida Buddha is dedicated to liberating all sentient beings, so that they may attain enlightenment. The Buddha is depicted as standing, to show that he is actively working towards the goal of helping all living things reach enlightenment.

In 1976, Paul Yamanaka and the Mission created a program called “Living Treasures of Hawaii,” which is dedicated to recognizing people who have reached high standards of achievement in their particular fields, and have made significant humanitarian contributions.
Image by kimubert on Flickr under Creative Commons License.