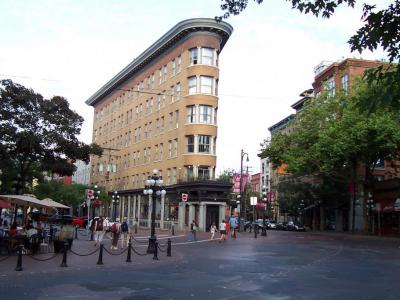 Hotel Europe is a six-story heritage building located at 43 Powell Street (at the convergence of Water, Alexander and Powell Streets) in the Gastown area of Vancouver. Situated on a triangular lot, the building is designed in the flatiron style. It was completed in 1909, becoming the first reinforced concrete structure in Canada and the earliest fireproof hotel in Western Canada.

The old hotel is also known as the Angelo Calori Building, named after the hotelier who had built it, and was purposefully situated close to the old steamship docks at the foot of Columbia Street. From there a bus would bring passengers to the hotel. To this day, the edifice has retained its original Italian tile floors and leaded-glass windows.

They say, the hotel houses one ghost for certain and possibly even two. The initial paranormal encounter here was reported in the 1980s and appeared in the form of scratching noises coming from behind the brick wall coupled with the feel of a bad presence in the otherwise empty building. That ghost had scattered around the floor the orderly placed tools left by one of the contractors.

The second spirit, which might as well be same as the first, is the apparition of a man dressed in a black coat with a flat cap. He appears in the poster shop on the street level, and was first spotted in the early 2000s. The apparition has been seen on several occasions since.
Image Courtesy of Flickr and NNECAPA Photo Library.
Sight description based on Wikipedia.