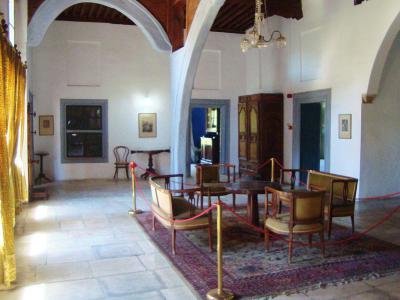 The Hadjigeorgakis Korensios Mansion, or House of Dragoman Hadjigeorgakis Kornesios, is situated near the Archbishopric, in the neighborhood of Saint Antonios, where the wealthy notables of the Greek community traditionally used to live. The mansion is the most important example of urban architecture of the last century of Ottoman domination that survives in old Nicosia. It opened on 3 May 1960 with the aid of public subscription, three years after a foundation was established to protect the property from developers who wanted to demolish the block.

The owner of the mansion, Hadjigeorgakis Kornesios, was a dragoman, the official interpreter for the Divan (Council) of the Sultan for thirty years from 1779. The house was built in 1793 with local bloc-cut sandstone and is a two-storey building. The monogram of the owner and the date of its erection can be seen on a marble tablet inside the entrance. The architectural plan of the building in the form of a Greek "Δ" surrounds a central garden with a fountain and a private bathhouse (Hammam) which has three rooms. Today the mansion, which was awarded the Europa Nostra prize for its exemplary renovation work, functions as a museum. The entrance fees is €1.70.