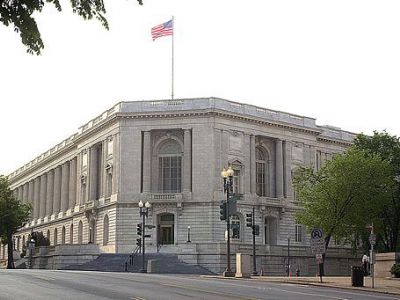 There are in total four buildings used by the United States House of Representatives as offices. After the initially allocated spaces at the US Capitol got very crowded, the first purpose-built property to relive pressure for office space was the Cannon House Office Building, located on the south side of the Capitol, connected to it by an underground passage. Completed in 1908, this was also crowded almost immediately, so the Representatives had to rent additional quarters to accommodate themselves.

Their second property, smallest of them all, is the Longworth House Office Building, completed in 1933, located south of the Capitol. This building has 251 congressional offices and suites, plus 12 committee rooms. There is a large assembly room that is currently used by the Ways and Means Committee. After its construction, the Cannon House Office Building was remodeled and the number of offices there dropped from 397 to 85 office suites, 23 committee rooms and 10 single room offices.

The Rayburn House Office Building is the newest, having been completed in 1965. Biggest of the Office Buildings, it houses 169 representatives. This building has an underground transportation system, called the Capital Subway System, that connects it to the Capitol. There is also a pedestrian tunnel that links all the Congressional Office Buildings on the Hill.
Image by ScottyBoy900Q on Wikimedia under Creative Commons License.