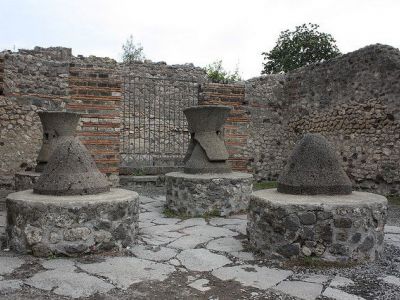 House of the Baker, Pompei (must see)

The House of the Baker dates from the 2nd century BC, but like many buildings in Pompei, was badly damaged by the 62 AD earthquake. It is believed that the house was being extensively renovated when it was destroyed by the eruption of Vesuvius. The ground floor of the house had been converted into work rooms, with the living quarters moved to the top floor. The renovation was incomplete at the time of the eruption in 79 AD. One of thirty-five bakeries discovered in the city, the House of the Baker gives an insight into the impressive food manufacturing techniques used in Roman times.

The hortus, or garden, located behind the building, contains machinery used for grinding wheat. The vaulted oven was heated by millstones carved from lava rock. There are also tables where bread was rested before and after baking. Between the garden and the main building there lies a row of stalls. It is believed that the bakery owners would have used the stalls to sell bread to the citizens of Pompei. Many residential buildings did not have their own ovens, so the bakeries played a huge part in feeding the city’s population. It was here that the skeleton of a harnessed mule was discovered during excavations.
Image by Shadowgate on Flickr under Creative Commons License.