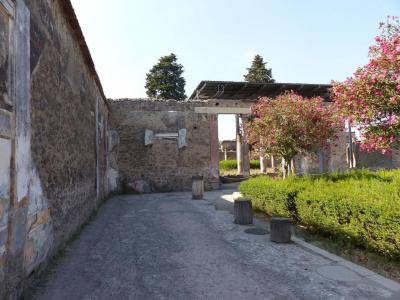 House of the Faun, Pompei (must see)

Casa del Fauno, or the House of the Faun, was built in the Samnite period, at least 100 years before the volcanic eruption which consumed Pompei. Largely ruined by the two earthquakes, which preceded the eruption, it has been preserved to represent the scale and layout of a Roman mansion.

It is known as the House of the Faun due to the discovery of a bronze statue on the edge of an impluvium – a basin used to collect rainwater for drinking and bathing. The statue depicts a dancing faun – a small, mythical creature believed to roam the wild woodlands that were once common across southern Europe. The original sculpture is housed in Naples’ National Archaeological Museum, but the exact replica of it is now found in the centre of the basin.

The house covers three thousand square metres, occupying an entire block of the ancient city. It is divided into five sections – four built around atriums and peristyles, and a network of service rooms. Look out for two other notable artworks in the complex. Firstly, the mosaic spelling out ‘HAVE’ (a popular Roman greeting) at the entrance, and, secondly, a replica of a detailed mosaic inside the house, that depicts Alexander the Great’s victory at the Battle of Issus in 333 BC.
Image by Ben Demey on Flickr under Creative Commons License.