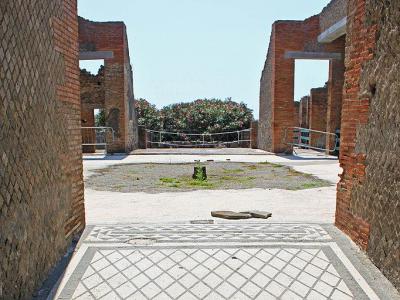 House of the Geometric Mozaic, Pompei

The House of the Geometric Mosaics is a large dwelling, comprised of more than sixty rooms. It is located on the south western slopes of the hill on which Pompei stands, with scenic views of the Gulf of Naples behind it. It was originally two separate houses – the entrances, marked 14 and 16, can still be seen on the road outside. It is thought that the buildings were only converted following the earthquake in 62 AD. Following extensive damage, the external façade and walls of No.16 were restored. No.16 served as the main entrance to the house, and is the only part still open to the public.

The house has a layout consistent with many others in Pompei. The entrance door opens onto an atrium, with a square impluvium at its centre. The atrium is one of the largest in the city. Behind it, a tablinum leads up to a portico, with a peristyle behind that. The house is notable, perhaps unsurprisingly given its name, for its elaborate tiled artworks. A number of the floor decorations, made from signinum opus, have survived in a good condition. The most spectacular is a black and white tiled mosaic in a geometric pattern.
Image by laura padgett on Flickr under Creative Commons License.