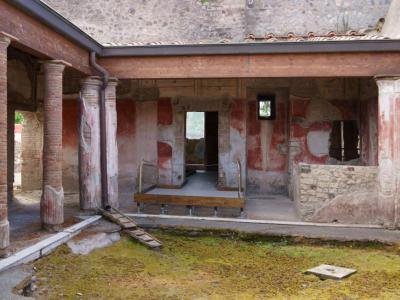 House of the Ship Europa, Pompei

The House of the Ship Europa is found in the south east of the city. It is named after a large drawing on the north wall of the peristyle, which depicts a ship bearing the name Europa. It is not thought to be a real ship, but instead an allegory of the goddess Europa, who was kidnapped at sea by Jupiter, disguised as a bull. Beyond the peristyle lies the feature for which the house is renowned; a long, narrow garden, several times larger than the buildings at the front of the house.

This garden was used to grow an impressive array of fruits and vegetables, including beans, onions and cabbage, as well as grapes, used to produce wine. In the Roman era the production of wine was largely home based, with many houses having the facilities to press grapes. Trees bearing exotic fruits such as cherries and apricots are believed to have been planted here, having arrived from the Far East from the first century BC. Lemons were also grown here; the Romans continued the Hebrew tradition of using lemons to kill bacteria and thus fight infection. The stalls at the back of the garden were used to rear animals.
Image by Lordwigg on Wikimedia under Creative Commons License.