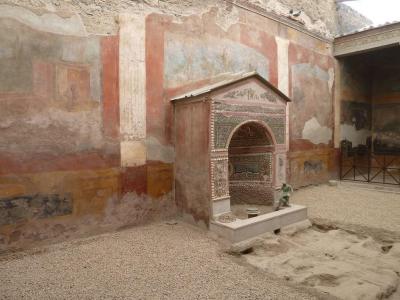 House of the Small Fountain, Pompei

The House of the Small Fountain is found in the western end of Pompei, close to the ancient city walls. It was built in the 1st century BC, and combines architectural features which span the history of Pompei. Almost all of the rooms open onto a central atrium. The entrance of the house is heavily decorated, demonstrating the owner’s wealth and social status to all who visited the building. The roof sloped inwards, allowing rainwater to collect in the central impluvium. A cistern built below the basin gathered the water, which was then recovered and used in the production of food and wine.

The peristyle, located in the garden, is richly decorated with frescoes of landscapes and maritime buildings. Whilst many features of the house are consistent with BC-era Roman buildings, the key feature is a more modern addition. The fountain-nymphaeum, which gives the house its name, is believed to have become a fashionable feature in the 1st century AD. Like much of the house, it is heavily decorated with mosaics and sculptures. The fountain takes the form of a miniature arch with a triangular roof. The water springs into a hollow underneath the arch, with bronze statuettes on either side.
Image by S J Pinkney on Flickr under Creative Commons License.