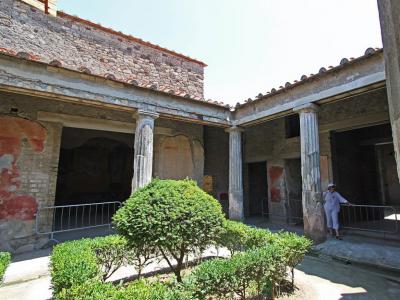 House of the Tragic Poet, Pompei (must see)

The House of the Tragic Poet is also known as the Homeric or Iliadic House. It is a fairly typical Roman era residential building, built in the 2nd century BC. It is famous for a series of elaborate mosaics and frescoes which depict scenes from Greek mythology. It has attracted interest from writers and academics ever since it was unearthed in November 1824. The artworks discovered are among the finest ever found in Pompei. This is unusual, given that the house itself is unremarkable compared to some of the city’s larger villas. Little is known of the family that owned the house, except that they were most likely killed in the 79 AD eruption of Vesuvius.

There are frescoes and mosaics throughout the House of the Tragic Poet. A mosaic found in the entrance hall shows a chained dog, with the words ‘Cave Canem’ – beware of the dog – written underneath. The house’s atrium and peristyle feature frescoes depicting several Greek Gods, including Zeus, Aphrodite, Achilles and Poseidon, amongst others. Many literary figures have been based upon this mysterious building, including Vladimir Janovic, whose epic poem House of the Tragic Poet gave the house its name. Janovic’s work is based around the myths and stories told in the house’s many frescoes and mosaics.
Image by spbutterworth on Flickr under Creative Commons License.