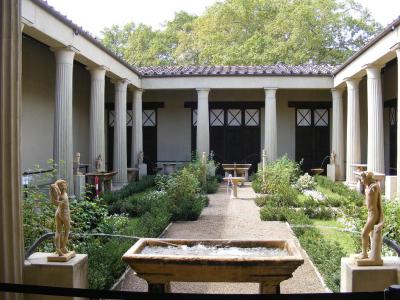 House of the Vettii, Pompei (must see)

The House of the Vettii is a mansion built around a central open space, and was once one of Pompei’s most luxurious residences. It is particularly well preserved, featuring many exceptional wall frescoes. This suggests that it was constructed and decorated between the earthquake of 62 AD, which damaged many of the Roman city’s buildings, and the 79 AD volcanic eruption that buried it altogether. It is named after its owners – Aulus Vettius Conviva and Aulus Vettius Restitutus. Both are believed to have been freed slaves that subsequently amassed a large fortune.

Visitors will enter the mansion through a darkened atrium. You can see the servants’ quarters off to one side, built around a smaller atrium. In the entrance foyer, there is an almost life size image of Priapus, the Roman god of fertility. Priapus features heavily in frescoes all over Pompei – often appearing in graphic images which have led to repeated attempts to censor the original artwork. At the centre of the complex stands a peristyle, an open air garden space flanked by Doric columns. Symmetrical in design, it once contained several marble fountains and sculptures of mythological figures. The walls, as with many of the rooms, are lined with several ornate frescoes, framed in red and yellow paint, as is common throughout the buildings of Pompei.
Image by Jan Arkesteijn on Wikimedia under Creative Commons License.