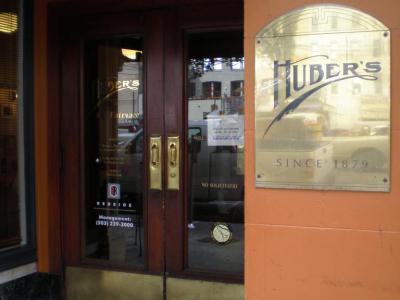 Established as far back as 1879, Huber's (originally The Bureau Saloon) is one of those restaurants that has withstood the test of time and changing dining habits. The menu, alcohol, and service have remained constant over the years, representative of a bygone age when elegant, yet non-pretentious dining was the norm rather than an exception. It is not a restaurant for a quick turn around, and deserves time to appreciate the meals, atmosphere, service, and experience.

Menu-wise it is varied, yet providing an excellent choice of vintage options, as would be found in an old-time steak-seafood house. Continuing with the tradition of preparing dinners since the 1800s, Huber's prepares around 100 pounds of turkey each day to make "at least a dozen different dishes including the classic turkey dinner, hot and cold sandwiches, turkey marsala, cordon bleu, piccata, gumbo, drumsticks and wings, and Chinese barbecue turkey." Turkey-related foods that failed to catch on with patrons included "turkey coffee" (a combination of Wild Turkey bourbon, coffee and whipped cream) and an "Americanized" version of "turkey giblet chop suey".

Spanish coffee has become the signature drink of Huber's, introduced by Jim Louie after "stealing" the idea from a bar in Milwaukie, OR, known as Fernwood Inn. Made tableside with "great flair", it consists of rum, triple sec, Kahlúa, coffee, whipped cream, and nutmeg. The drink's theatrically acrobatic preparation is half the enjoyment!

Want to visit this sight? Check out these Self-Guided Walking Tours in Portland. Alternatively, you can download the mobile app "GPSmyCity: Walks in 1K+ Cities" from iTunes App Store or Google Play. The app turns your mobile device to a personal tour guide and it works offline, so no data plan is needed when traveling abroad.