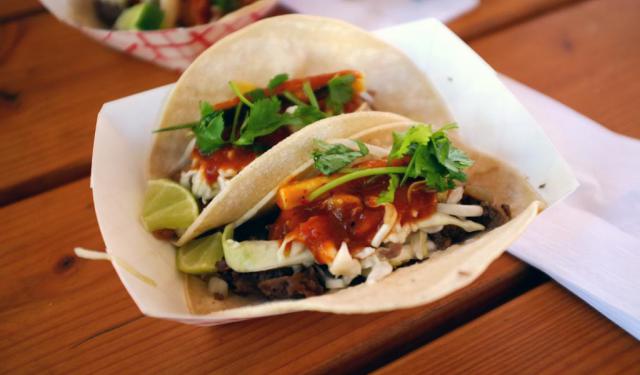 Image by Sho Ito on Flickr under Creative Commons License.

While Portland's "foodie scene" is still in its relative infancy, it has rightfully earned the No. 1 spot on not one but several lists ranking the "Best Foodie Cities in America." Albeit rather small in size, the city is blessed with easy access to quality natural bounty, be it fresh seafood, fresh vegetables, fresh fungi, or delicious local wines. Adding to this the explosive line-up of food carts offering choices from a global variety of dishes (including Mexican, Thai, Indian or Korean, to name just a few), one can seriously get food on par with the best found in most of the world's major cities. Take this self-guided walk to convince yourself, and bring an appetite!
How it works: Download the app "GPSmyCity: Walks in 1K+ Cities" from iTunes App Store or Google Play to your mobile phone or tablet. The app turns your mobile device into a personal tour guide and its built-in GPS navigation functions guide you from one tour stop to next. The app works offline, so no data plan is needed when traveling abroad.

Open 24/7, Voodoo Doughnut is a classic Old Town doughnut shop known for its eclectic decor, pink-neon sign, and imaginative flavors that are well worth trying, especially for the more adventurous. The company maintains two shops in Portland, and clearly they are a must-do experience for visitors, because donuts are a 'big thing' in the city.

The good varieties are glazed and/or chocolate or maple-frosted (sometimes with added bacon if you happen to skip lunch). They may be filled with cream or decorated with sprinkles, Captain Crunch, or tiny chunks of Oreo cookies, too. Some of the quirkier and hilarious ones may not be the most tasty, but all of the creations here bring smiles to the faces of customers, and there is a glass-enclosed display case to look at and pick out what you would like.

After making your selections (note that they only accept cash), cross the street for a great cup of coffee and take your picture in front of the 'Keep Portland Weird' sign. Don't leave Portland without some Voodoo!

Image by David Wood on Flickr under Creative Commons License.
2

Although it is called a market, this building on the corner of Pine Street and 2nd Avenue features many well-known Portland-only eateries in a very 'food-court', picnic-style atmosphere. Whatever you choose here, it's going to be pretty good, allowing to explore some of the many things that Portland has to offer – from old favorites to ones never tried before, all in one setting. It's a very clean and nice space, great for lunch break or a casual dinner. Could be very convenient for a date, but the variety of food choices also makes it a go-to place for groups with folks who might want different things.

For cuisines, the food hall has a little bit of everything: smokey Korean BBQ, rotisserie chicken, ramen, soft-serve, burgers and pizza – you name it. Vegetarian? Check out the Veggie Reggie: vegan sausage patty, tofu bacon and cheese (ask for none of the latter if you are vegan). Once you've ordered from an eatery, expect to be given a beeper of when the food is ready to be picked up. Some of the eateries have their own seating/counter space, but much of it is communal seating.

Image by Another Believer on Wikimedia under Creative Commons License.
3

In recent years, food carts have become an essential part of the Portland "brand", merging the city's distinctive, do-it-yourself character with its local passion for good food at a good price. These no-frills, mobile food purveyors park in clusters (or "pods") in different neighborhoods all over the city. One of the more established spots on 3rd Avenue has been affectionately dubbed Gyro District owing to the multitude of Middle-Eastern carts serving gyros, shawarma, and hummus platters. Sprinkled among them are, more recently, a few carts that offer a welcome sense of variety: try the steamy 'bao buns' (pockets of dough with fillings like chicken curry and pork in gravy) or the dumplings and wonton soup for some truly authentic Chinese food.

Notably also, the 3rd Avenue Pod includes the popular DC Vegetarian, known for its vegan and vegetarian burgers and sandwiches, as well as carts offering cuisine from Thailand, Vietnam, Egypt and Mexico. Once you've got your meal, stroll to Waterfront Park and pull up a bench (or spot of grass) — instant picnic!
Image by Visitor7 on Wikimedia under Creative Commons License.
4

Established as far back as 1879, Huber's (originally The Bureau Saloon) is one of those restaurants that has withstood the test of time and changing dining habits. The menu, alcohol, and service have remained constant over the years, representative of a bygone age when elegant, yet non-pretentious dining was the norm rather than an exception. It is not a restaurant for a quick turn around, and deserves time to appreciate the meals, atmosphere, service, and experience.

Menu-wise it is varied, yet providing an excellent choice of vintage options, as would be found in an old-time steak-seafood house. Continuing with the tradition of preparing dinners since the 1800s, Huber's prepares around 100 pounds of turkey each day to make "at least a dozen different dishes including the classic turkey dinner, hot and cold sandwiches, turkey marsala, cordon bleu, piccata, gumbo, drumsticks and wings, and Chinese barbecue turkey." Turkey-related foods that failed to catch on with patrons included "turkey coffee" (a combination of Wild Turkey bourbon, coffee and whipped cream) and an "Americanized" version of "turkey giblet chop suey".

Spanish coffee has become the signature drink of Huber's, introduced by Jim Louie after "stealing" the idea from a bar in Milwaukie, OR, known as Fernwood Inn. Made tableside with "great flair", it consists of rum, triple sec, Kahlúa, coffee, whipped cream, and nutmeg. The drink's theatrically acrobatic preparation is half the enjoyment!

You might want to drop by KOREAN TWIST for some amazing Korean bulgogi tacos filled with really tender beef and sweet chili sauce – a great combination on a soft corn taco shell. Alternatively, grab the burrito – a huge tortilla wrapped with seaweed on the inside and stuffed with rice, fresh veggies and herbs, and spicy tofu. Part burrito, part sushi, part salad, so quite outstanding for a snack! The flavors are based on traditional recipes and the service is polite and efficient.

Five stars also go to LA JAROCHITA's habanero sauce (similar to habanero wasabi), which hits hard and fast, then goes away. They make a burrito with chicken, beef and pork that rocks for fatty flavor, or you can opt for the traditional chicken enchiladas. Just be aware to go early if you're hoping to skip the perennial lunchtime line.
Image by John Dalton on Flickr under Creative Commons License.
6

Step inside Jake's and you'll travel back in time. The front of the menu boasts visits from stars like Ernest Borgnine, and inside it certainly captures that old time Hollywood glamour with bird's eye maple tables, dark wooden booths and frescoes of woodland mountains. The waiters are extremely attentive, decked out in spiffy white jackets, whose personal histories working here are just as fascinating as the restaurant itself.

It's a classic place to go to if you're into seafood (stuffed salmon is the chef's specialty here, with just the right ratio of stuffing to salmon), though there is a rather large bar area, too, if you want a nice cocktail and some appetizers instead (the bacon-wrapped crab and shrimp stuffed prawns are a must!).

Welcome to the residence of mixing drinks, the hub of cocktails! A great place to start or end your night, Teardrop Lounge greets you with cozy seats, a stylishly curved island bar, muted lighting and a menu of extensive and very delicious drinks. Whether you're seeking classic cocktails or something exotic with unexpected ingredients and a dizzying bouquet of flavors, your wishes will all be fulfilled. Just leave it to the work of skilled bartenders, who are excellent at their craft and know everything about the art of mixing drinks. The atmosphere is particularly nice in summer when the front opens up. Oh, and the food! Small plate portions of heaven!