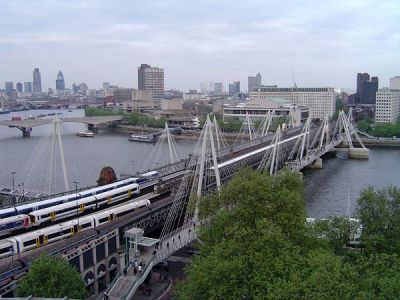 In 1845 the Hungerford Bridge was a suspension bridge that farmers from the south of England used for crossing the River Thames when they freighted their produce to the Hungerford Market, which was the most important market in the south of the capital at that time.

In 1859 the bridge was bought by the South Eastern Railway Company, who wanted to build a railway bridge from the south of England to the capital. Businessmen working in London were leaving their city houses to live in the country suburbs and they wanted to travel to the capital in comfort.

The old suspension bridge was replaced by a railway bridge with nine arches of wrought iron lattice girders, designed by Sir John Hankshaw. The Hungerford Market was replaced by Charing Cross Station, which was named after the Cross of Eleanor, the wife of Edward 1st. When Eleanor died, King Edward 1st commissioned a cross to be erected wherever his wife’s body rested during the 12 day journey from Lincoln before being buried in Westminster Abbey. One of the crosses was erected in the hamlet of Charing on the outskirts of the ancient City of London.

In 2002 two cable-stayed foot bridges were added on each side of the railway bridge because the Council of London wanted to encourage pedestrian tourists. These foot bridges share the same pier foundations as the railway bridge and are accessible either by steps or by lift for the disabled.
Image Courtesy of Wikimedia and ChrisO.
Sight description based on Wikipedia.