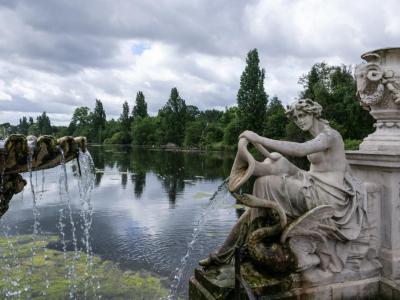 Hyde Park is one of the largest Royal Parks in London and a home to several attractions. The most notable of them is the Speakers' Corner on the north-east side, near Marble Arch. This platform for campaigners, preachers, and those seeking to express their views on a variety of subjects, all except criticizing the Queen of course, has been in place since the mid 1800s. Among the historic figures to have spoken here at the time are Karl Marx, Vladimir Lenin and George Orwell.

The tradition of public speech in this spot dates back hundreds of years to the infamous Tyburn Gallows that use to be nearby. There, between 1196 and 1783, over 50,000 people had been executed, each of which was allowed a final word before hanging. Some of them confessed, others defended their innocence or criticized the authorities. People enjoyed watching the executions and even bought tickets. Eventually, the gallows were dismantled, but the tradition for protest at Hyde Park remained.

Not far from away here is a Rotten Row, famous for being Britain's first illuminated street. The lights here were installed back in the 1690s by King William III who built this road to travel between Kensington Palace and St James's Palace. In fear of attack by highwaymen, he ordered it to be lit with 300 gas lamps. The name “Rotten Row” is a mispronounced version of the French “Route du Roi”, which means King's Road.

Another popular sight of the park is near the Grand Entrance at the south-east corner. It is called Apsley House and was originally built for Lord Apsley in 1778. What makes it popular is that for several years this house was the home of the 1st Duke of Wellington who defeated Napoleon at Waterloo. It was also the first property on the north side of Piccadilly that came into sight for those entering London from the west, for which reason people jokingly referred to it as 'Number 1, London'. The official address here is 149 Piccadilly, Hyde Park Corner, London, yet rumors insist that if you post a letter to “Number 1, London”, it would come here.

Hyde Park is divided in two by the body of water called, the Serpentine. This pond is much popular with nature lovers and photographers, and is also one of the best-known outdoor swimming spots in London. Every Christmas, members of the Serpentine Swimming Club gather here for the Peter Pan Cup organized by the Peter Pan author JM Barrie in 1904.

Why You Should Visit:
Great place for so many activities! In this park, you can nearly do anything.

Tip:
Take a map with you if you're not familiar with the park, or rent a bike and cycle around.
For nature lovers & photography enthusiasts, add Serpentine Lake to your list.