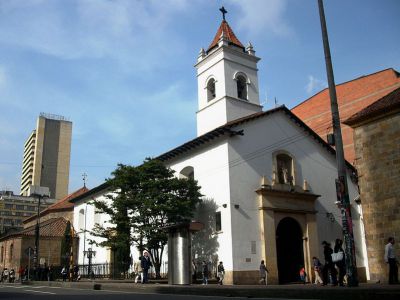 One of the first churches built by the conquistadors in Santa Fe was the chapel of Veracruz, established in 1546, 8 years after the founding of Bogota, on the other side of the river Viracocha, on the road to Tunja. Years later, in 1631, he formed the Market Square San Francisco (now Santander park), which was extended by the Hermandad (Brotherhood) de la Veracruz, composed of merchants. The 1827 earthquake destroyed much of it and it was rebuilt. The church is not an example of fine architecture or a subject of great historic interest, yet here lie the remains of many patriotic martyrs, so it was declared a National Pantheon.
Image Courtesy of Wikimedia and Pedro Felipe.