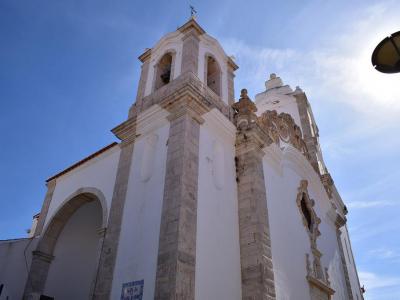 In 1707 the Brotherhood of Saint Anthony erected a church to Saint Anthony that was not attached to a Franciscan priory or convent. Saint Anthony was attached to the military forces of Lagos when he was joined to Infantry Regiment No. 2 in 1668. Since he was a part of the regiment, the Regimental Command was able to pay him a salary.

Thus Saint Anthony became the only canonized saint who got paid for his services. Not only that, he received promotions and soon achieved the rank of colonel. This practice ended in 1910 but the saint presumably can continue campaigning, after all, he never really retired.

The outside of the church is of smooth masonry for the most part. The facade is in the Baroque style. Above the main door is a niche with an oculus decorated with shells. On top of the facade is a shield with branches. The side facade of the church has an arch that forms a vaulted porch. The church has two bell towers, differently shaped.

The interior of the church is a treasure. Sumptuous Baroque decorations and gilded wood carvings cover the walls. Where the gold stops the white and blue azulejo tiles begin. There are six paintings of the miracles of Saint Anthony. Enthroned on the altar, he sits with the baby Jesus in his arms, flanked by angels with flaming torches.

The Municipal Museum of Lagos is attached to the church. It has an impressive collection of paintings of sacred art and 17th century carvings.
Image by Bextrel on Flickr under Creative Commons License.