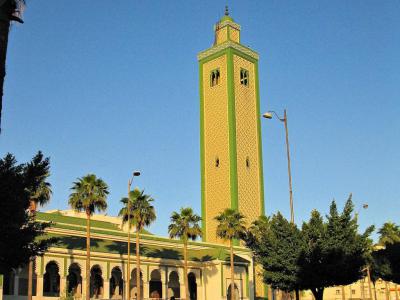 An architectural gem in the heart of Morocco's spiritual capital, Mosquée Imam Malik is found near Kennedy Plaza, and is commonly referred to by locals as "Tajamouâti", after its benefactor, Abdel-Hadi Tajmouati, who financed the construction.

This house of prayer is easily one of the most gorgeous and biggest ones in the city (second only to the Quaraouiyine in the Medina) and is fit to accommodate up to 4,000 worshipers.

The mosque opened its doors for the first time during Ramadan, on February 4, 1994, after ten years of construction. Renowned for its modern design, the building nonetheless has retained the ancient architectural character typical of Moroccan mosques. It has four main portals, one of which is reserved for women. Inside, there are rooms of ablutions and other amenities.

Quite busy during a day with regular service, as evidenced by the large crowds at each call to prayer, the Imam Malik mosque also acts as a place of religious education between Al Maghrib and Al Ichae prayers.
Image Courtesy of Wikimedia and Robert Prazeres.