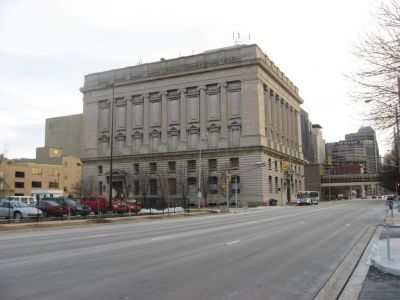 The current Indianapolis Masonic Temple, also known as Indiana Freemasons Hall, is a historic Masonic Temple. Construction was begun in 1908, and the building was dedicated in May 1909. It is an eight-story, Classical Revival style cubic form building faced in Indiana limestone. The building features rows of engaged Ionic order columns. It was designed by the distinguished Indianapolis architectural firm of Rubush and Hunter.

At the time of its construction the Temple held seven separate pipe organs, of which six survive and remain operable. In 1919, there were 1,174 meetings held in the Temple. More than 41,000 meals were served that year, with thirty-six banquets held in December alone.

During World War II, the south end of the basement was converted for use as a Masonic Service Club, a social and recreational area for members of the armed forces, with pool tables, a snack bar, writing desks, and a library of national newspapers–similar to a USO club.

Even the rooftop was designed for active use. Originally covered in tile, the rooftop was used for drill team practice by the Knights Templar, as well as open air parties and dinners with a view of the city. Today it is largely covered with cell phone towers and is largely inaccessible.

The Indianapolis Masonic Temple is the statewide headquarters of the Grand Lodge F&AM of Indiana, and home to numerous individual Masonic lodges and associated groups. It is also the location of the Masonic Library and Museum of Indiana; the Indiana Masonic Home Foundation; Indiana DeMolay, and many more. The building features an auditorium, two stages, a large dining hall and catering kitchen, a ballroom, and seven large lodge rooms designed for a variety of ceremonial and social purposes.
Image Courtesy of Wikimedia and Nyttend.
Sight description based on Wikipedia.