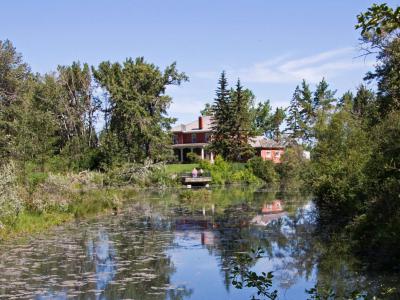 If you love watching birds, do not miss a visit to Inglewood Bird Sanctuary on your trip to Calgary. This wildlife reserve is spread over 36 hectares and is inhabited by at least 270 species of birds. There is no dearth of nature trails here that run through the riverine forest.

You can find a variety of interesting wildlife at this sanctuary any time of the year, even though summer and spring are the best seasons for bird viewing. If you are here during late fall or spring, you will find uncommon species of gull. During fall migration, you can find many warblers.

The sanctuary is bordered by the Bow River Pathway through which bicycles and pedestrians access the area. This sanctuary is open on all days of the year from dawn to dusk. You can enjoy the natural ambience strolling along the 2.5 km pathways. On the western side of the lagoon, between the river and the south bridge, you will find trails that are wheelchair accessible.

Visit this sanctuary in various seasons and you will find that more birds come here during certain periods than others. If you wish to enjoy watching the migrant songbirds, the best time to be here is August and September.

If you visit the Inglewood Bird Sanctuary during winter, you will find a lot of tame black capped chickadees and thousands of mallards.
Image Courtesy of Flickr and Marilyn Peddle.

Want to visit this sight? Check out these Self-Guided Walking Tours in Calgary. Alternatively, you can download the mobile app "GPSmyCity: Walks in 1K+ Cities" from iTunes App Store or Google Play. The app turns your mobile device to a personal tour guide and it works offline, so no data plan is needed when traveling abroad.

This tour is all about Calgary's outdoor sculptures: some of them weird, some of them outstanding, some of them merely amusing. You won't find imposing grey monuments with tones of history behind them. It's all about those small unrevealed sites in tourist handbooks, those colourful places captured in photos. Take this self-guided walking tour and discover Calgary's creative...  view more

This self-guided walking tour is to discover Inglewood, a friendly and picturesque neighborhood on the bank of Elbow River. Explore the natural pearls of Calgary by visiting the Bird Sanctuary or the Bow Habitat Station, and learn about the history of the city at Fort Calgary. Take this tour and enjoy a stroll in central Calgary.

As the biggest city in Alberta, Calgary has quite a few things to show its visitors – the beautiful Old City Hall, the amazing collection in the Glenbow Museum, and the ever present Calgary Tower, just to name a few. Take this self-guided walking tour to discover the Calgary downtown with its rich cultural and historic heritage.

Calgary is the largest city in Western Canada and one of the most popular tourist destinations in the country. The city was named after a hamlet with the same name on the Isle of Mull, Scotland.

The area that is called Calgary today was once populated by indigenous people, now known as the First Nations, until Europeans arrived in the 19th century.