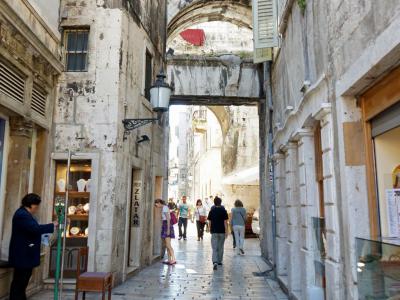 Iron Gate and Church of Our Lady of the Bell Tower, Split

The West gate, or Iron Gate is one of four gates giving access/egress to the palace of Diocletian. It is part of an urban complex of the People's Square (Pjaca), the old City Hall, the clock tower, and the Nakic, Karepic, Cambi, and Cipriani palaces.

The arrangements around the Iron Gate include ancient developments like the defensive rampart, with its double door safety chamber and the Church of Our Lady of the Bell Tower. The church is a tiny, narrow space similar to the churches in the other gates. It was renovated when the bell tower was added in the 11th century.

On the northern wall of the rampart, behind a sealed medieval niche, a sculpture of hands holding a crown was discovered. It was restored and returned to the niche.
Image Courtesy of Flickr and Dennis Jarvis.