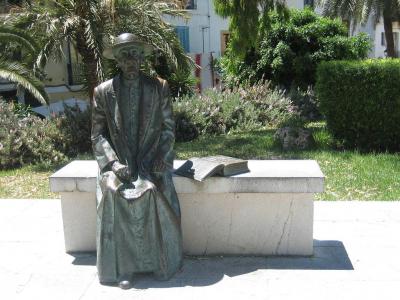 Among other peculiar landmarks found in the Dalt Vila (Old Town) of Ibiza is a statue of a priest sat on a bench under the eucalyptus trees of Sa Carrossa. The seated figure is that of Isidoro (Isidor) Macabich i Llobet, the chaplain and historian who used to live nearby, and who delved into the study of the historical roots of Ibiza like no one else before him.

The statue pays tribute to the priest for his cultural importance for the island, depicting him with an open book, probably the Bible. Don Isidor was born here in 1883 in the family of Croatian immigrants; he died in Barcelona 90 years later. The statue was inaugurated in 1980, seven years after his death.

Active and famous personality as he was in the city, Macabich founded the Centre for Social Action and Federation Catolicoagrària Ibiza. He began writing his History of Ibiza in 1935 and published it in four volumes in 1966-1967. In addition to being a historian, he was a multifaceted and controversial chaplain, as well as a writer, columnist, poet, archaeologist, and teacher.

From where he sits, Macabich welcomes visitors and invites them to take their time and enjoy the historical and cultural heritage of Ibiza. Upon inauguration, on August 5, 1980, the sculpted priest was wearing glasses, which sadly remained in place for only 24 hours. "The next day they fell off," explained the architect Elías Torres, confessing that without lenses, the bronze face of Isidor Macabich shows the expression of bewilderment under his Pope's prelate hat, quite different from that which those who knew him alive, still remember.
Image by Syrcro on Wikimedia under Creative Commons License.