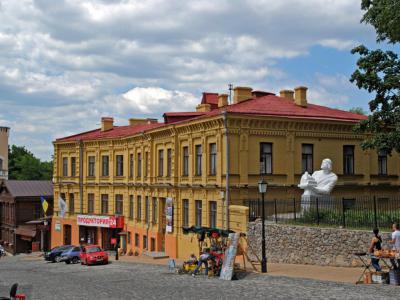 The Ivan Kavaleridze Museum-Workshop was founded in 1993 on Andriyivsky Descent , in building 21, where in 1911 the artist worked on a monument to Princess Olga .

The museum-workshop was opened on November 15, 1993. The founders of the museum are Nonna Kapelgorodska - niece of Ivan Kavaleridze, film critic, researcher, author of many works and studies on the works of IP Kavaleridze and Rostislav Sinko (1933-2010) - Ukrainian film director, stage sculptor, sculptor , Honored Worker of Culture of Ukraine, student, husband of N. Kapelgorodskaya, heir of Ivan Kavaleridze. Rostislav Sinko was also the director of the museum-workshop until 2008. The museum was opened by order of the Representative of the President of Ukraine in Kyiv Mr. Leonid Kosakovsky and on the initiative of many prominent cultural figures and politicians.

The museum houses more than 5,000 exhibits dedicated to the life and work of the master. Near the museum in a small garden are exhibited several works by the sculptor, which did not fit inside the museum, in particular, the original of the first monument to Princess Olga, who was beheaded by the Bolsheviks.

A memorial room of the artist is being arranged, which includes furniture and personal belongings donated by Rostislav Synko.

The museum has a creative studio, which has made several films about the artist, is engaged in the implementation of plans that he could not realize. The video hall and gallery "In the House of Ivan Kavaleridze" promote the best figures of national art and talented youth.
Image Courtesy of Wikimedia and Posterrr.
Sight description based on Wikipedia.