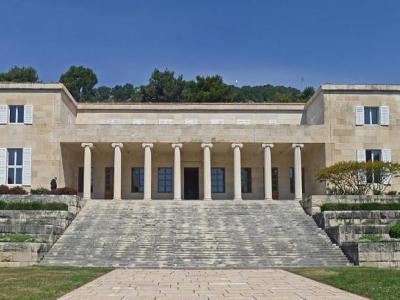 Artist and sculpture Ivan Mestrovic bought a plot of land in the 1920s. The land was on the Marjan peninsula, west of the City of Split. He intended to build a villa for a summer home. The villa was completed in 1939 after a design by Mestrovic. The building overlooked the Adriatic sea. It was meant to be a home, working and exhibition space.

Initially, the Gallery held 70 sculptures chosen to be shown in the museum of his work in Split. Over time these holdings grew through donations from Mestrovic, his heirs and other artists. The gallery was closed for renovations after the war of Croatian Independence. It had been damaged and it was in a near dilapidated condition.

The Gallery re-opened in 1998 with a new permanent collection. The Gallery's holdings today include 583 drawings, four paintings, 291 architectural plans and some sets of furniture. The Gallery also is home to 168 works of art donated by the heirs of Ivan Mestrovic.

On permanent exhibition are two floors of art and an outdoor sculpture garden. The works are arranged by theme rather than chronologically and in conformity with the space.