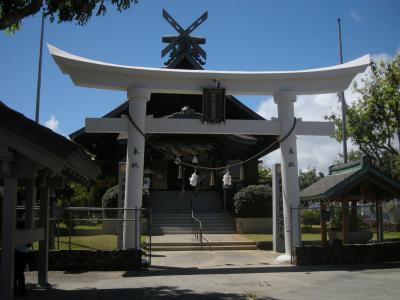 The site of the Izumo Taishakyo Mission has been a Shinto shrine since the early 1900s. Unfortunately, anti-Japanese sentiment during World War II led to a serious crackdown on Shintoism. As a result, the mission was seized by the city of Honolulu during the war, and was not allowed to reopen until 1968.

Today, the Izumo Taishakyo Mission is one of the few Shinto shrines operating in the United States. The A-frame building was inspired by the design of the Taisha Machi, a classical Japanese Shrine located in Shimane Prefecture, Japan.

The primary deity, or kami, of this shrine is Okuninushi-no Mikoto (which literally translates to “Great Land Master”), the kami of happiness, medicine, farming, marriage, and agriculture. Visitors must wash their hands at the edge of the temple grounds, and sound a brass bell to let the spirits know they are there. Then, at the entrance, visitors should bow twice, clap twice, bow again, and make an offering of coins to the collection box on the ground. The mission is also the site of a traditional New Year's Day pilgrimage by Shinto Buddhists. As many as ten thousand visitors, both Buddhists and non-Buddhists, arrive at the mission for that day.
Image by Dogsgomoo on Wikimedia under Creative Commons License.